Being an Optimist at All Times
Summarized from   Brian Tracy’s article
Wikipedia, the free encyclopedia  states that optimism is a mental attitude that interprets situations and events as being best (optimized). One of ways to be healthy  is to be optimist.  Certaintly, everyone wants to be physically healthy. You want to be mentally healthy as well. The true measure of “mental fitness” is how optimistic you are about yourself and your life. Learn how to control your thinking in very specific ways so that you feel terrific about yourself and your situation, no matter what happens.
Control Your Reactions and Responses
There are three basic differences in the reactions of optimists and pessimists. The first difference is that the optimist sees a setback as temporary, while the pessimist sees it as permanent. The optimist sees an unfortunate event, such as an order that falls through or a sales call that fails, as a temporary event, something that is limited in time and that has no real impact on the future. The pessimist, on the other hand, sees negative events as permanent, as part of life and destiny.
Isolate the Incident
The second difference between the optimist and the pessimist is that the optimist sees difficulties as specific, while the pessimist sees them as pervasive. This means that when things go wrong for the optimist, he looks at the event as an isolated incident largely disconnected from other things that are going on in his life.
See Setbacks as Temporary Events
For example, if something you were counting on failed to materialize and you interpreted it to yourself as being an unfortunate event, but something that happens in the course of life and business, you would be reacting like an optimist. The pessimist, on the other hand, sees disappointments as being pervasive. That is, to him they are indications of a problem or shortcoming that pervades every area of life.
Don’t Take Failure Personally
The third difference between optimists and pessimists is that optimists see events as external, while pessimists interpret events as personal. When things go wrong, the optimist will tend to see the setback as resulting from external factors over which one has little control.
If the optimist is cut off in traffic, for example, instead of getting angry or upset, he will simply downgrade the importance of the event by saying something like, “Oh, well, I guess that person is just having a bad day.”
The pessimist on the other hand, has a tendency to take everything personally. If the pessimist is cut off in traffic, he will react as though the other driver has deliberately acted to upset and frustrate him.
Remain Calm and Objective
The hallmark of the fully mature, fully functioning, self-actualizing personality is the ability to be objective and unemotional when caught up in the inevitable storms of daily life. The superior person has the ability to continue talking to himself in a positive and optimistic way, keeping his mind calm, clear and completely under control. The mature personality is more relaxed and aware and capable of interpreting events more realistically and less emotionally than is the immature personality. As a result, the mature person exerts a far greater sense of control and influence over his environment, and is far less likely to be angry, upset, or distracted.
Take the Long View
Look upon the inevitable setbacks that you face as being temporary, specific and external. View the negative situation as a single event that is not connected to other potential events and that is caused largely by external factors over which you can have little control. Simply refuse to see the event as being in any way permanent, pervasive or indicative of personal incompetence of inability.
Resolve to think like an optimist, no matter what happens. You may not be able to control events but you can control the way you react to them.
Action Exercises
Now, here are three actions you can take immediately to put these ideas into action.
First, remind yourself continually that setbacks are only temporary, they will soon be past and nothing is as serious as you think it is.
Second, look upon each problem as a specific event, not connected to other events and not indicative of a pattern of any kind. Deal with it and get on with your life.
Third, recognize that when things go wrong, they are usually caused by a variety of external events. Say to yourself, “What can’t be cured must be endured,” and then get back to thinking about your goals.

Abstract
It is a model of community based education that would lead the society to the great civilization.
This learning community’s main concern is noble universal values with justice, including social
justice with gender equity and ecological fairness. Its learning process, always stands on local living context with all community members’ participation (as learners and tutors as well) and the surrounding environment as learning laboratory.
Its learning strategy is learner-centered rather than teacher-centered; it always utilizes anything available in the surrounding environment as the source of learning, including the complexity of matter or problem. The common logic “because I’m poor and incapable, I don’t go to school” would be turned to “it is because I’m poor and incapable; I have to study so I could get smarter and more prosperous”. Learning does not have to be through being in school. We might drop out of school but we should never drop out of learning. Drop out of learning is equal with drop out of life.
The “umbrella” institution of this learning community is “attached” to PKBM  (or Community Learning Center) that operates under the coordination of Ditjen P N F I (or Directorate General of Non Formal and Informal Education). 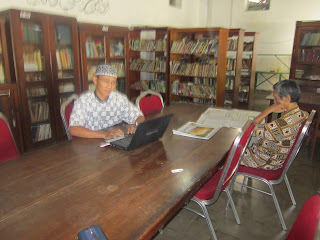 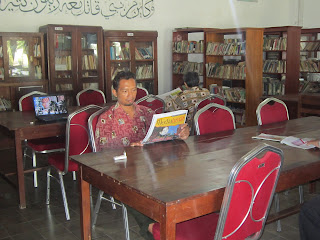